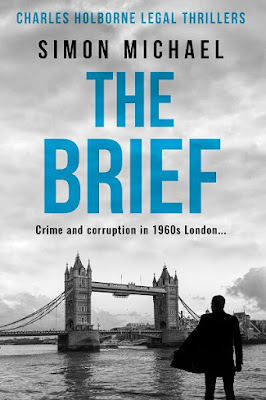 This book was given to me by the publishers Sapere Books to read and review. Massive thanks goes to them for the chance to do this, I really appreciate it. The Brief is book one of the Charles Holborne Legal Thriller series and is the first book I have read by this author.

"A dark and gritty legal thriller set in 1960's London. I loved it"

Barrister Charles Holborne is not popular. A Jewish East Ender with a rough past, he is ostracised by his anti-Semitic and class-conscious colleagues who don’t want him in their prestigious Establishment profession.
And the bitterness Charles feels at work is spilling over into his personal life, putting his marriage under strain.
When a high-profile murder case lands on his desk, Charles is hopeful his fortunes will turn around.
But after a shocking crime is committed, he finds himself on the other side of law…

Can he outwit those trying to frame him? Will he manage to unmask the real criminal?
Or will he find himself on trial for murder…?

When it comes to legal thrillers, I have not really read that many. I am not really sure why, because the ones I have read I have always loved. I have recently just finished Thirteen by Steve Cavanagh and I wondered why yet again. Well.... Along came The Brief by Simon Michael. Not only did I love the sound of this book but it was set in the 1960's, and I thought that would be great to read, and also a good learning curve as to what the legal system was like back then, when they did not have all the technology they do now.

The story itself started off at a great pace. You were introduced to the main character and a brief outlook as to what he does and where. The scene was set, and you were knuckling down to get stuck in. I mention it quite a lot on my reviews but there is nothing worse than a book that takes 50+ pages just scene setting. These are the books that I normally start to switch off on, and normally don't like. The Brief was not like this at all and I knew from those first few pages I would love this book. Twists & turns a plenty kept you guessing throughout which I also found really enjoyable. Another part of the book which I loved was the dark side of London which was portrayed, moving from east to west, north to south you felt no one was safe. Cameos from the Kray Twins added to the darkness of this story... I mean, how could it not. There was a little mention of the Great Train Robbery, along with other real life stories which put you there on the streets with the characters.

The main character Charles Holborne was an interesting person to follow throughout the book and when it came to it he had to go back to a younger version of his self to survive. This added to the excitement of the book. I cannot wait to read the next in the series and see how the author follows up with this character.

Was there anything I did not like? just a very small bit really, there was not that much court action as I was expecting but this did not ruin any part of the book for me. Hopefully in the next books we get to see Charles in court action a lot more.

Overall this was a really enjoyable book, which I found easy to read and like I've said I cannot wait to read the next book in the series, I hope it is as great as this.

Have you read this book? What do you think? Do you agree with me or not? I would love to know.