Book Review: Behind Her Eyes by Sarah Pinborough 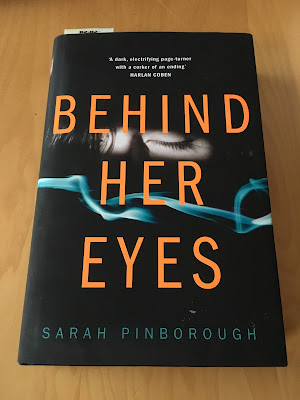 I will be honest. I had never heard of Sarah Pinborough before but Behind Her Eyes was one of those books that had a real buzz about it on social media. I then came across it in my local bookstore and just had to buy it. It sounded so good.

David and Adele seem like the ideal pair. He's a successful psychiatrist, she is his picture-perfect wife who adores him. But why is he so controlling? And why is she keeping things hidden?

As Louise, David's new secretary, is drawn into their world, she uncovers more puzzling questions than answers. The only thing that is crystal clear is that something in this marriage is very, very wrong. But Louise can't guess how wrong – and how far someone might go to protect their marriage's secrets.

This book started well and got straight into it. I liked how it was written, each chapter either set in the past or in present day and by a different character. You were only a few chapters in and your mind was starting to think already. What has happened? Who is she? Because of this, and how the book was written throughout, it made the pages turn at a very fast rate. You were hooked and just needed to know what was happening next. Another reason for it being so addictive was most of the chapters finished on a cliff hanger which meant you were not allowed to go to sleep yet and had to carry on. I finished this book in a week. I am not the fastest reader and normally read around 2 books a month. This shows how good it was.

The characters in this book were greatly written, easy to understand and fun to read about. I found them to be believable. You probably know someone like these characters in real life. However the question you have to ask yourself all the time is how well do you really know someone? You never know what goes on behind closed doors at all. This is the best way to approach the people in this book as well as in real life.

The ending........ What can I say? Apart from WOW.... You will never get it. It was outrageously brilliant and made me shout what the F*** out loud at the end. To show how great this ending was, it had it's own hashtag on Twitter. #WTFThatEnding was trending not long after this book was released. At one point I thought I had it, in fact I was convinced I had. I am sure a lot of people who have read this book were the same and like them I failed miserably. Am I telling you what happens? ermmmm no... Sorry, I am not allowed shhhhhhh.

Was there anything I did not like about this book? Nope, nothing at all. I loved it.

As June ends & July starts, it is the start of holiday season for a lot of people. I know a lot of people will only read on holiday, as they don't normally have time, but if you are going on holiday and want something to read then I fully recommend this for you. However please make sure you put your sun tan lotion on as before you know it, you could be burnt to a crisp.

Sarah Pinborough not only writes a great book but is also one of my favourite people to follow at the moment on Twitter. She makes me laugh a lot and you get to find out a lot about Ted the dog.

I scored this book a 5 out of 5. I will definitely be reading more books by Sarah Pinborough. Fingers crossed it is not just a one off, but I have a feeling it is not.

Have you read this book? What do you think? Do you agree with me or not? Let me know....

Book Review: The Ice Beneath Her by Camilla Grebe 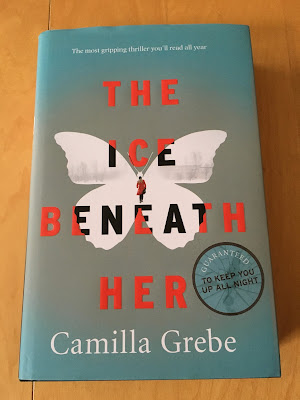 The Ice Beneath Her

If you have read my blogs before you may have guessed that I do like a good old Psychological Thriller. I came across this book in my local supermarket whilst I was browsing the book section. I have never heard of Camilla Grebe before so I had a look and it sounded really good, plus it was only £5 (€5.69/$6.38US) which is great for a new hard back. In my basket it went....

"A good storyline. It just did not get me gripped"


A young woman is found beheaded in an infamous business tycoon's marble-lined hallway.

The businessman, scandal-ridden CEO of the retail chain Clothes & More, is missing without a trace.

But who is the dead woman? And who is the brutal killer who wielded the machete?

Rewind two months earlier to meet Emma Bohman, a sales assistant for Clothes & More, whose life is turned upside down by a chance encounter with Jesper Orre. Insisting that their love affair is kept secret, he shakes Emma's world a second time when he suddenly leaves her with no explanation.

As frightening things begin to happen to Emma, she suspects Jesper is responsible. But why does he want to hurt her? And how far would he go to silence his secret lover?

When I read about this book, it did sound really good. I love the fact that it was set in Sweden, which was a first for me when reading books. I was really looking forward to reading this.

I found that it did not take me long to get used to the characters and the setting's in this book which I liked. Sometimes there is nothing worse than you having to read a quarter of a book to find out about the main character. I liked how the book was written, mixing it up with modern day and then back in time building the story so that the two met at the end. This kept you guessing and there were plenty of twists along the way which had me changing my mind as to what will happen.

As for the storyline itself, I thought this was really good. Nothing gets you set up for a book than a body missing it's head. There were parts which where gross and there were parts that kept you on edge. All in all the perfect recipe for a good psychological thriller. However, the bit I was really disappointed with was that it just did not get me gripped. I found the book a struggle in parts where you really did have to push yourself to carry on reading. A lot of psychological thrillers finish each chapter on a cliff hanger to get your mind racing and to push you to read on. I found this is where you felt let down on what could have been a cracking read.

The characters in the book where really good, my favourite were the people who worked for the police. I loved how they had a bit of history between them and also that their lives were not perfect, which gave it a real life feel to it. In 2016 my wife and I watch a short drama series called 100 code which was also set in Sweden and the characters reminded me a bit of these.

I scored this book a 3 out of 5. Like I've said, the storyline is good but the reading of it was not great. Would I read another book by Camilla Grebe?? You know what I probably would, I believe you have to give author's another chance to impress you and I am positive Camilla will.

I would like to know what other people think, that have read this? Do you agree with me or not? let me know..