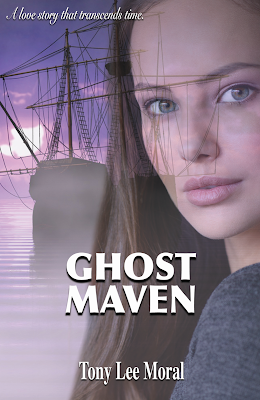 Firstly I must thank the author Tony Lee Moral for giving me a copy of this book to read and write an honest review for him. I am really appreciative of this. Ghost Maven is the second book by Tony Lee Moral that I have read, having read Playing Mrs. Kingston last year. I really enjoyed that book having put it in my top 5 best books of 2015, so I was looking forward to this from the off.

"A fun and enjoyable read about Love, with a Ghostly twist that makes you want the good guys to win"

Alice's mother passes away and with her father and little sister, Sophie, she moves to Pacific Grove in California. Alice is deathly afraid of the water despite living in a community surrounded by it. In order to push through her phobia, she joins the Kayaking club in high school.

During a routine kayaking drill, a fog rolls in and Alice becomes disoriented, losing all sense of direction. A large wave turns the kayak over, dumping Alice into the icy-cold pacific. She nearly drowns when a young man dives in after her. . .Henry Raphael.

After Henry's rescue, Alice gains more than her life. Henry is a beautiful seventeen-year-old or more accurately, one-hundred-seventeen years. The relationship between them takes Alice on a journey for which no one could prepare her.

Long distance relationships are difficult - how can Alice bridge a divide between planes? Henry died over a century ago but lives on in the fourth plane of existence waiting for an opportunity to atone for past deeds that caused the death of his ship's entire crew. Their vengeance still hanging over his head, Henry and Alice learn their love will be tested by more than the passage of time and living in different dimensions.

This book is not normally one that I would choose to read, but this past year or so I have been trying different genre's so that I am seeing what else is out there. I have to say I really enjoyed this book, the story was original and nothing I have really seen before, either in book form or on TV/films. Ghost Maven is classed as a young adult book, but I am 36 and found this suitable for older people as well.

Is this a love story? Yes it is, but it's not a soppy romantic book. It's about a teenage girl dealing with a lot a sad and stressful troubles in her life that a girl of that age should not have to go through. It's about her managing this and the horrible and painful matter of falling in love for the first time. The boy she loves is around the same age, well... He was when he died a hundred years ago. An ancient curse has been put on the town meaning that peoples souls are still there living amongst real life people. Like all good love stories there are people, or ghosts as it is in this book that are trying to ruin things and are out for revenge. This story is a fun and enjoyable read about love, with a ghostly twist that makes you want the good guys to win.

The characters were greatly written and very enjoyable to read about. My favourite being Emily & Christian who were Alice's friends that helped and supported her when she needed it. Emily making me laugh throughout. I also loved the sound of O'Reilly, the captain of the ship that sank a hundred years ago. He was kind of like an 1800's pirate. I mean who does not like pirates??

Was there anything I did not like about this book? Very little really, it was easy to read and only took me 6 days, which is good for me. At the beginning of the book there were a few chapters which I thought ended quite abruptly as though there was some story missing, but as the book went on this flowed a lot easier.

I scored this book a 4 out of 5. Like I have said it is an enjoyable book to read with a great story. If you are a young adult, I would really recommend it or even if you are an adult that is just getting into reading, it is a great book for that.

Has anyone else read this book? do you agree with me or not? Let me know what you think..