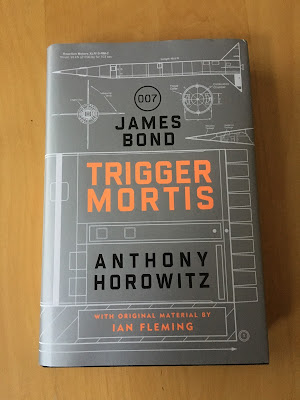 Trigger Mortis is the latest James Bond novel. This one has been written by bestselling author Anthony Horowitz. Growing up one of my favourite film franchises was the James Bond movies. I, as well as my brothers used to watch them all the time, we still do in fact. There are so many TV channels to choose from nowadays that you probably could not go a whole week without one of the Bond films being on. I was aware that the family of James Bond's creator Ian Fleming was allowing new books to be written but I have yet to read one. Each new Bond book that is written is by a different author which I think is a great idea. I like the idea of different people putting there own twist on how they see James Bond whilst keeping this in the style of Fleming. This was a Christmas present from my sister in law Pam.

It's 1957 and James Bond (agent 007) has only just survived his showdown with Auric Goldfinger at Fort Knox. By his side is Pussy Galore, who was with him at the end.

Unknown to either of them, the USSR and the west are in a deadly struggle for technological superiority. And SMERSH is back.

The Soviet counter-intelligence agency plans to sabotage a Grand Prix race at the most dangerous track in Europe. But it's Bond who finds himself in the driving seat and events take an unexpected turn when he observes a meeting between SMERSH's driver and a sinister Korean millionaire, Jai Seong Sin.

Soon Bond is pitched into a entirely different race with implications that could change the world. Thrown together with American adventurer Jeopardy Lane, Bond uncovers a plan that will bring the west to its knees in a heart-stopping climax.

I really liked the start of this book as it follows straight on from the film Goldfinger. It does not mean you have had to have watched the film at all as the book explains what happened. Pussy Galore made famous in the film by Honour Blackman is still with Bond and as soon as he is back in London his next case is waiting for him.

This is my first Anthony Horowitz book I have read. My wife has read a few and always loved them. I really liked how it was written. The words just flew off the page and this made it easy for you to get stuck into the action. I read this book in two weeks which for me is really quick. I will definitely be reading more books by Anthony Horowitz.

The story for this book was brilliant. It had all the usual Bond attributes from fast cars, intelligent, strong minded & beautiful women, a powerful and enjoyable to read "evil baddy", lots of action in numerous countries around the world and of course James Bond saving the world from destruction. The only thing I thought was missing was Bond having interaction with Q branch, which was always one of my favourite parts of any film. This is where all of Bond's specialist cars and gadgets are created. As this is my first James Bond novel I have read I don't know if this part of the story was in the original books or just put in for the films.

The characters in this book were very enjoyable to read. Jai Seong Sin was the main baddy and I really liked how he was portrayed. He had a very dark and evil mind which left people scared to be around or work for him. There was also the greatly named female characters which were made famous in the James Bond novels. Pussy Galore was there in the beginning but Jeopardy Lane became the main ally for Bond and without her he would not have been able to save the world. I really enjoyed how her character grew throughout the book.

Was there anything I did not like? Apart from the missing Q branch story lines then not really. I fully enjoyed this book and can't wait to read my next James Bond novel. I have been and bought Devil May Care by Sebastian Faulks and Solo by William Boyd which I will review when the time comes.

I scored this book a 4.5 out of 5. It's a great action packed book which keeps you on the edge all the way to the end. Even if you are new to the James Bond Character you will be able to read this as in the first 1/4 all things are explained too you.

Has anyone else read Trigger Mortis? What do you think? do you agree with me at all? who was your favourite James Bond in the movies? Let me know. I would love to find out. 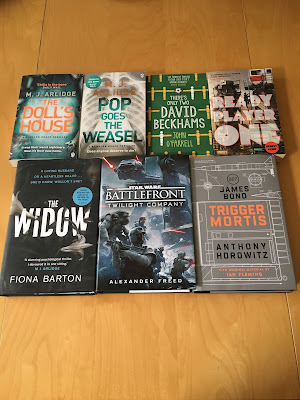 So...... This week we are already half way through September. I know we say this every year but this year is really flying by and its quite scary. It actually does feel like it was only April the other week.

I would like to apologise for my lack of blogging this year. I was surprised when I signed in and found my last blog was way back in February. I am pleased to say that I will be blogging a lot more regularly from now. 2016 has been a very busy year for me personally and I have literally not had any time for it at all. I have however had time to read although not as much as I would have liked too.

Over the next couple of weeks I will be catching up with all the book reviews from the books I have read which will include:

Once I have got round to writing all of these blogs I will also have finished reading my big summer read A Little Life by Hanya Yanagihara which is very dark yet addictive.

At the start of the year I set myself a 2016 reading challenge on www.goodreads.com of 24 books. I know to a lot of readers this is not that much but for me it will be the most I have read in a year if I hit it. How am I doing? Well I am a little behind at the moment. I have completed 10 plus I am over half way in my latest book. Now I have more time on my hand I will be pushing myself for the remaining 3 1/2 months of the year to try and hit my target.

Like most of you I have around 50 books on my shelf unread. I then make it worse every time I walk by a book shop. I can't help but go in and always come out with a few more to add to the collection.

For the remainder of the year I am looking forward to reading some of the following books I have selected to read next:

How has everyone else's reading year been going? did you set yourself a target? What has been some of the best books you have read this year? Let me know.

Thank you again to everyone who has read one of my blogs I really do appreciate it and I promise I will never leave it this long again.