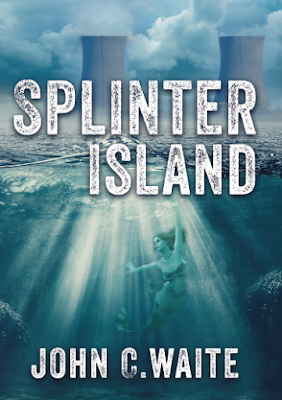 Splinter Island is a book that was given to me by the author John C.Waite for a read and honest review. A massive thanks to John for giving me the chance to read his book. This is a Young Adult Fantasy novel. This is book one in a new series and the 1st book I have read from the author.

"Sit back, relax, and take in the world of the Crrry. A good start to what could be a great Young Adult Fantasy Series"

Precis (taken from the cover):

What's going on at Splinter Island? Suzette Breahnam needs to know. Her father manages the newest nuclear generating plant in the world, and something's wrong. Suzette's already mystified after stumbling on a previously undiscovered race of intelligent beings. That race is the Crrry, and they live unseen and unknown to humans in aquaria throughout the world. Not only are they intelligent, but they are also telepathic. It's the Crrry who warn her of the danger, a strange, frog-like thing squatting in The Plant's water reservoir. Adding to Suzette's burden is her desire to help her older brother. A car crash two years ago left him paralyzed. Suze believes the Crrry can help Tommy return to normal. When she introduces Tommy to the world of the Crrry, his normal life becomes an even greater burden. She and Tommy face the Crrry's ancient enemy, the Rssssh, alongside their aquatic allies and Tommy takes immense joy from the physical abilities imparted by the Crrry. But when the Frog becomes a mysterious threat to The Plant, and her father suffers a strange injury, could how she responds make a life or death difference?

Fantasy books are not my number one genre to read, but every so many books I like to read one. For one I think it is good to mix up your reading styles, this way it not only broadens your reading skills but also means that the books you read do not roll into one and become all "samey". I also love reading Fantasy novels because, anything goes! You can step into a make believe world where things could never happen in real life and your brain goes on a ride that gives day to day a rest. When I was offered this book to read I jumped at the chance.

I found this book very easy to get into. When you start reading Fantasy books you normally have to train your brain to try and imagine what the author has in theirs. You got a quick background as to what has happened to the main characters and the scene was set. I liked that the main characters were just a normal human family which were going through  troubles which all families across the world go through week in week out. This gave it a real life affect, meaning that it could happen in real life if you believe it can (you never know). Suzette, the daughter of the family is the hero of the book. She is the one who discovers that unknown to all humans there is a lifeform in their aquarium at her home (and all over the world) which, by using telepathic skills can become one of them. Them = the Crrry. I found the Crrry to be greatly written and really fun to follow throughout the story. They had their own battles going on against other lifeforms who wanted to destroy them. But, because of them they were able to alert Suzette of a danger which nobody knew was happening. Another character in the book I really liked was Tommy, Suzette's older brother who after a car crash was paralysed and could not really communicate. Tommy, who could also transport to the Crrry, felt a purpose in life again. This was not only a little upsetting but a feel good plot line all rolled in one.

The Crrry.. A strange but very funny name which I must have pronounced 10 different ways whilst reading. Was it Cry with silent r's, or Cru, or Crie, sometimes I just read crrrrrrrrrrrrrrrrr. I will let you as the reader decide on how you would like to pronounce it.

I liked how the story built up to a will they, won't they finish at the end and I feel the ending set you up well for the next book in the series. This book is designed for Young Adults and I believe it definitely fits the mark. I am 37 and enjoyed reading this as well. I have read a few YA books and some of them are great for adults. If you have just had a heavy read then something like this is good to read afterwards.

Was there anything I did not like about the book? Well...... For me, there was just one little thing I felt could have been better and that was a few chapters felt rushed, like they should not have finished when they did and you were expecting to learn more. Did this ruin the book? not really, like I said it was just a small thing that I felt let the book down from being a 5 star.

I scored this book a 4 out of 5. I really enjoyed it and if you are into Fantasy books I would recommend you read this. I can't wait to read the next book and find out how the story evolves.

Has anyone else read this? what do you think? do you agree with me or not? Let me know...

CBailey31
Posted by CBailey31 Books & Blogs at 10:45 No comments: Links to this post 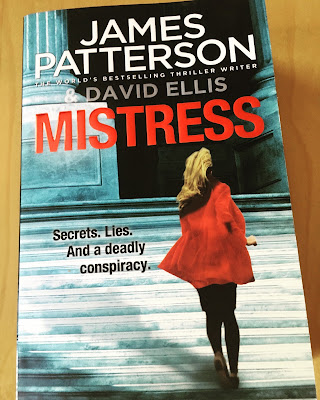 Mistress, funnily enough was a book bought for me by my wife. This has been on my TBR shelf for a while. If you have read my blog before you will know I am a huge fan of James Patterson books especially The Women's Murder Club series. James Patterson books were what got me into reading and I am always thankful for that.

As Ben Casper watches his best friend plummet from her sixth-floor apartment balcony, he realises his life is about to change. Diana had no reason to kill herself, she had to have been pushed.Diana worked for the CIA, so the investigation into her death is kept tightly under wraps. But Ben is a political journalist, and can feel that something isn’t right.Ben starts investigating for himself and soon discovers Diana was leading a double life he knew nothing about. But when more people involved die in questionable circumstances, it’s clear that someone doesn’t want the truth to be uncovered. And unless Ben drops his investigation, he could be next…

I have been thinking back and it must have been at least 4 years since I last read a stand alone thriller from James Patterson. I seem to have been reading a lot less of his books and if I do it is normally apart of a series. This one is the first I have read where he has wrote along with David Ellis.

I don't know what it is about Government conspiracies, lies & murder that gets me all excited but it does, whether it is in book form or film/TV. This story is set in America's capital Washington DC and before I started I was really hoping for a great read. I was not disappointed... The book is narrated by a political journalist called Ben Casper who after seeing his best friend die, is unable to let the authorities do their jobs. I really liked the main character Ben, I felt he was greatly written and you really wanted him to get done what needed to get done. The pages like most James Patterson books turned themselves at a super fast rate. There is something really pleasing about saying "oh go on just one more chapter" before you realise it is 2am and you have to be up in 5 hours. For me it's the sign of great story telling. This book had everything I wished it had from cover ups, lies, murder, scandals and the war between the government and the press that we see every day in most countries. As much as I like James Patterson books this is one of the best ones I have read in a long time.

The other characters in the book have their place in the story and are also written really well. It would not be Washington DC if you did not trust any of them. A lot of them were very mysterious and as the book went on you felt like everyone could turn at any point.

Was there anything I did not like about this book??? Not really. I thought it was cracking. Once I finish a book I also take a look on different websites, mainly Goodreads to see what other people are saying about the book you have read and there appears to be a lot that are not a fan of this. I find this quite strange but then again that is what is great about books. Everyone has different opinions on what is great and what is bad. It also makes discussions a lot more interesting. Life as they say would be very boring if we all like the same things.

I scored this book a 5 out of 5. Loved it and there is a part of me that hopes James & David write another book using Ben Casper as the main character.  I would recommend this book to anyone who loves James Patterson books or loves a good conspiracy.

Has anyone else read this book? what do you guys think? do you agree with me or not? I would love to know.

Posted by CBailey31 Books & Blogs at 10:20 No comments: Links to this post