Book Review: I Am Pilgrim by Terry Hayes 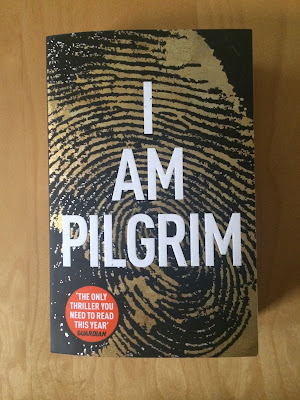 I Am Pilgrim
by
Terry Hayes
I first heard about this book when I was on the London Underground in 2013. I kept seeing the poster for it at most stations and it stuck in my head. At the time it was first published I had so many books at home that I had not read so I said I will wait for it to come out in paperback. When it did I bought it straight away only to then keep it on my bookshelf for another year..... as you do. I had heard so many good things about this book I was hoping that the wait would be all worth it.
A young women is murdered in a run-down New York Hotel, a father publically beheaded  in Saudi Arabia, in a Syrian research lab a doctor's eyes are taken from him when he is alive, human remains left on the mountainside in the Hindu Kush, a plot to commit mass murder. Only one man can link these together, only one man can take that journey. That man is Pilgrim.....
Firstly I believe this may be the longest book I have ever read, coming in at 892 pages long. The book started off really well for me, a mixture of introducing the characters in present day and then a little history of their past. The pages were turning really quickly as I got straight into it. For me though, about a quarter of the way through the book this changed. I don't know what it was ,but when the author was describing the "Evil" character and how he was plotting his master plan, I felt it did not run as smoothly and found it tough to get through. This changed again though (thank goodness) just after half way through the book. The story then kick started and had me gripped for the remainder of the book. I could not tear myself away. I flew through the last 300 pages.
The story in its self is believable. Terry Hayes has obviously done a lot of research into this, which showed with the in depth detail of everything, from characters, to places visited, to scientific terminology. Some book lovers would say he went into too much detail but Terry says himself in his notes at the back of the book, this is how he likes to read books so he wrote it this way as well.
I love the characters in this book. Pilgrim, the main character, is an agent in a secret government agency along with Saracen a war veteran. The story is centred around these two characters. Then, there is a mix of other people spread across 3 continents who all have a part to play in this spy thriller. Due to the in depth nature of the how the book is written, the author describes all the characters in detail, even ones that have been dead for years.
Was this book worth the wait? Yes, I believe it was. Apart from the little lull, it was a well written book and very enjoyable. Terry Hayes second novel, The Year of the Locust, is out in April 2016 and I will definitely be reading this.
I scored this book a 4 out of 5. Again it was the tough part that lost a point for me, otherwise it would have been a 5.
I would love to know what other people think that have read I Am Pilgrim. Do you agree with me or do you have your own thoughts. Let me know.
Speak soon.
CBailey31