Do we want an NFL franchise in London?

Do we want an NFL franchise in London?
by CBailey31
So, the NFL commissioner Roger Goodell has come out and said that there could be a London team in the next 5 to 10 years. Question is do we want an NFL franchise in London?
As a big NFL fan here in the UK, I for one am not a fan of the prospect. Don't get me wrong it would be a massive coup for the country if we were able to pull this off. I just think that it would be a huge disrespect to the American people and their fans. I believe that the only people that want a franchise is the people that will benefit financially.
We have had an NFL game at Wembley Stadium in London every year since 2007 when the New York Giants played the Miami Dolphins in the first International series. Last year for the first time we had 2 NFL games and this year we have 3. When the media speak to the teams and players of the NFL teams they all say how great it is when they come over here and the New England Patriots owner has even said he would play here every year if he could (Just not a home game though).
I along with my friends consider ourselves very lucky and have been to every game so far and also have tickets for all 3 games again this year. I personally have been fortunate to see my favourite team the San Francisco 49ers twice (winning both by the way). I know that without the International series that I would still have not seen them play in person. I know from talking to other NFL fans in the UK and Europe on Twitter that they feel the same when their team comes to Wembley to play. It's a dream come true to see your favourite team play and the memories will be with you forever. I know that a lot of UK/Europe fans make their annual holiday a trip to see their team play in the states. This is one of my dreams that one day I get to see the 49ers play at home. Unfortunately like most people money is the reason that stops us from doing this. Although I do keep asking my wife if we really NEED that new bathroom.
The big question that is on everyone's mind is, "Would you then start supporting the new Franchise if one came to London? Would I stop supporting the 49ers to support the London Royals? Would I spend my spare cash on a new London Bulldogs jersey with Tebow on the back??" No I bloody well won't, even as a second team to support I can't afford £70 to spend on a new jersey or any other merchandise for that matter. I know that there will be people out there that will buy the franchise and make them their team but for me and a lot of UK fans they will just not support anyone else than the team they support now.
The NFL is America's sport and I believe it should stay that way. Can you imagine if one of our football (Soccer) teams like Arsenal, Manchester United or even my beloved Leicester City up sticks and moved to America? Imagine not having your team there anymore and not being able to cheer them on unless you could afford the trip to America to watch them. Can you remember when Wimbledon Football club moved from south London and set up shop in Milton Keynes and became the MK Dons? That was 10 years ago now and the country is still outraged. Put yourself in other peoples shoes back in America and think how would they feel about the idea of their team not being there. Yes I know in America a franchise can move across the country and become a different team but it is still in America and part of their league.
I put on Twitter (@CBailey31) that we don't want to have a franchise and that 3 games a year is what we want. I am yet to receive a reply from someone who does want a franchise. 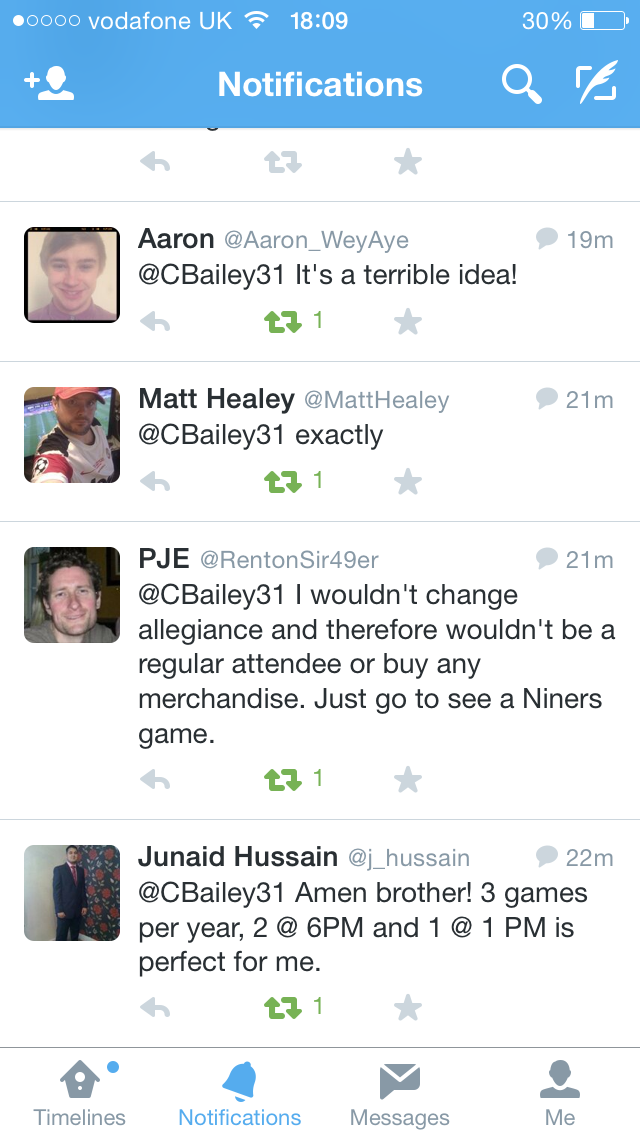 For me, having 3 games a year in London works great and I hope that over the next 5 years we get to see all teams that are yet to come over and play. I save all year to be able to afford to go to each game but anymore than that I would be struggling. Would 8 games a year work?? I believe that we could quite easily sell out for all 8 games but again it boils down to will it work in the long term. Fans would come to start with, but what happens in 5 years time and we have the number 1 draft pick again? Fans would only then pick the games when their favourite team are playing are not really care about the London Sherlocks.
What we have now is great! I love the fact that every year we get to see the NFL superstars in our own country. Lets not ruin this with a franchise.
This is only my opinion and my own thoughts about the subject. I would like to hear what other people think on the matter? What do American fans think about it? Please leave your comments on this post.
Speak soon
CBailey31 ﻿
﻿
Posted by CBailey31 Books & Blogs at 11:31 2 comments: 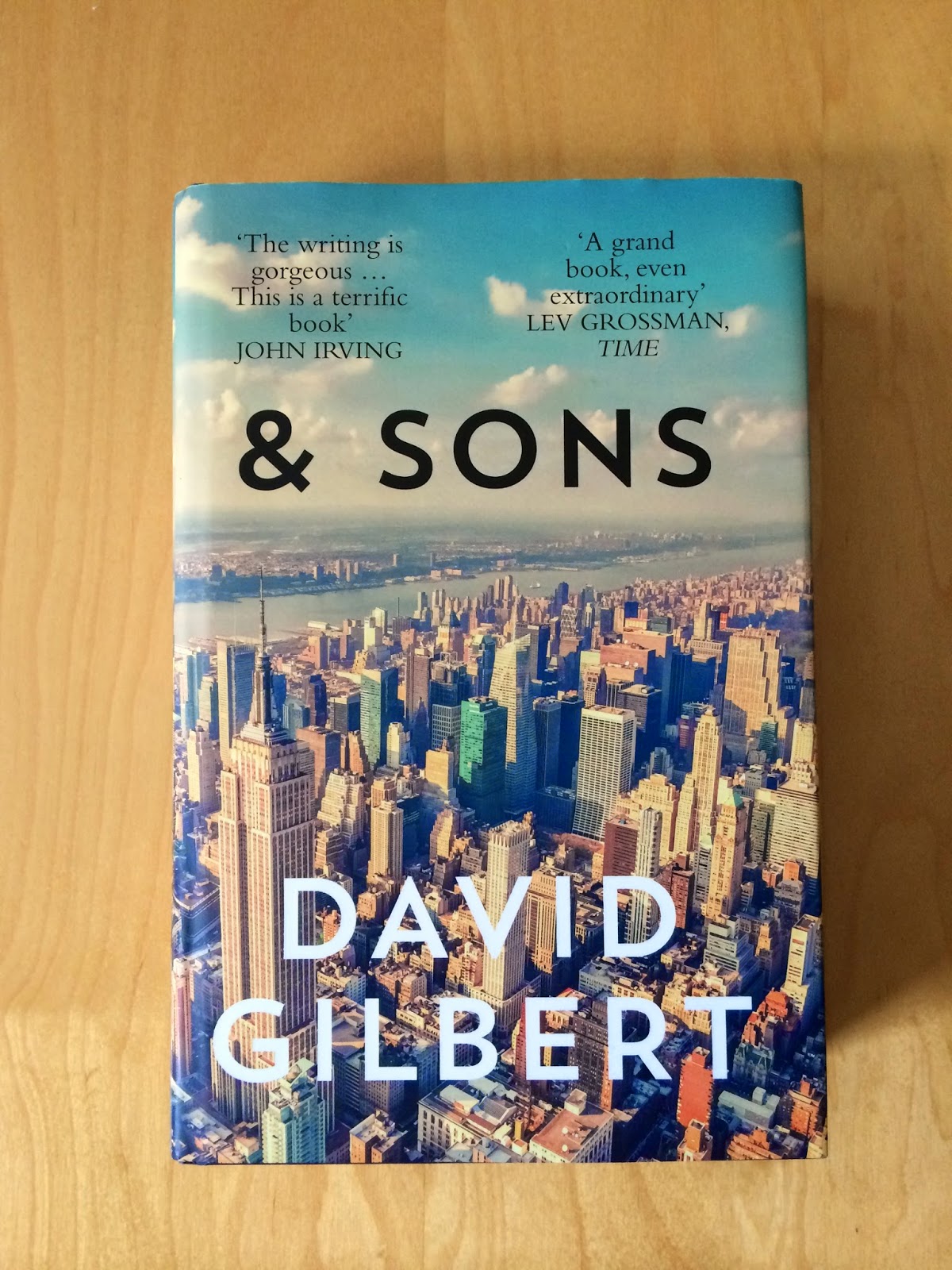 I was given this book by Waterstones to read and review on their website www.waterstones.com so thank you very much for the opportunity to do this. This is my first David Gilbert book so I went into this with an open mind.
A.N.Dyer is a famous author and after going to the funeral of his life long friend Charles Topping he realises that the life he has lead has not been as good as it should have. He decides that he needs to get his 3 sons together and confess to all his wrong doings, and try to re-build the relationships that have been broken these past 19 years before it is too late.
The book is narrated by Philip Topping the son of the dead life long friend and how he see's the story. This was a different way of writing which I don't think I have come across before. I found it good in most parts but then weird in other as a lot of the scenes Philip was not there so how did he witness this??? I found the first 100 pages of this book a bit long winded if I am to be honest, and found that the introduction of the characters went on too much and was sometimes confusing. This is because Gilbert started a story which went into another and then into another and then back to the original story. It was a bit like seeing Billy Connolly doing stand up but not as funny.  However once this has been done the story started to get going and the pages turned a lot faster.
About half way through the book your mind was wondering as to where this story was going and you knew there was a huge secret to be told. I had a couple of ideas but then the first twist came along and it was like WOW...... where did that come from. Never in a million years would I have guessed that and I have such a warped mind. This gave the book another kick start and you had to read on. The story then started to take shape and became more interesting. Just as the book was coming to an end there was yet another twist. This one again I had no idea was coming (yes I know I've been rubbish but that's good in a book) although it was a very sad twist and got me a little upset(no tears). This book was a great insight into the relationships between fathers & sons and that they are not always perfect. The book also had a dark side to it which added to story a lot.
The Character numbers were kept short which as you know from previous reviews I like. My two favourites were Andy (youngest son) and Jamie (middle son) I found them both very funny and interesting to follow throughout the book. Andy at times made me laugh out loud with his antics.
I scored this book 3.5 out of 5. I just found that it was missing something and lost marks for how the book started. Would I read a David Gilbert book again?? Yes I would, there were bits in there that was great and I love how the twists came from nowhere. I do recommend that you give this book a try. If you do,  and like me you found the start a bit slow then please stick with it as it does get better.
I would like to know what other people think that have read this book. do you agree or disagree?? Please feel free to leave comments below.
Speak soon
CBailey31
﻿
Posted by CBailey31 Books & Blogs at 09:33 2 comments: