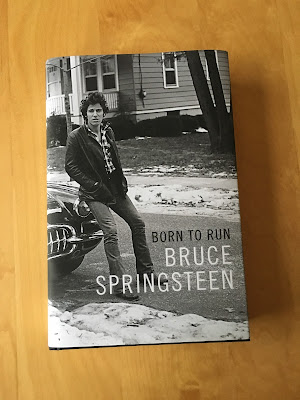 
Bruce Springsteen is one of my all time favourite music acts and I have been lucky enough to see him in concert twice. To be honest most concerts me & my wife go to are amazing but there is something extra special about Mr Springsteen. The fact that a man of 67 can play 3 1/2 to 4 hour concerts day in day out all around the world, and with such energy is truly amazing. The way he interacts with his fans as though they are all his friends makes you feel great. As soon as I heard that Bruce was writing this book I went straight online to pre-order. I did not even have to think about it.

"An in depth and personal insight into one of the greatest rock stars ever. Proving that if you are really desperate for something, you have to work very hard to achieve this"


In 2009, Bruce Springsteen and the E Street Band performed at the Super Bowl’s halftime show. The experience was so exhilarating that Bruce decided to write about it. That’s how this extraordinary autobiography began.

Over the past seven years, Bruce Springsteen has privately devoted himself to writing the story of his life, bringing to these pages the same honesty, humor, and originality found in his songs.

He describes growing up Catholic in Freehold, New Jersey, amid the poetry, danger, and darkness that fueled his imagination, leading up to the moment he refers to as “The Big Bang”: seeing Elvis Presley’s debut on The Ed Sullivan Show. He vividly recounts his relentless drive to become a musician, his early days as a bar band king in Asbury Park, and the rise of the E Street Band. With disarming candor, he also tells for the first time the story of the personal struggles that inspired his best work and shows us why the song “Born to Run” reveals more than we previously realized.
Born to Run will be revelatory for anyone who has ever enjoyed Bruce Springsteen, but this book is much more than a legendary rock star’s memoir. This is a book for workers and dreamers, parents and children, lovers and loners, artists, freaks, or anyone who has ever wanted to be baptized in the holy river of rock and roll.

Rarely has a performer told his own story with such force and sweep. Like many of his songs (“Thunder Road,” “Badlands,” “Darkness on the Edge of Town,” “The River,” “Born in the U.S.A.,” “The Rising,” and “The Ghost of Tom Joad,” to name just a few), Bruce Springsteen’s autobiography is written with the lyricism of a singular songwriter and the wisdom of a man who has thought deeply about his experiences.

As previously stated on some of my other blogs, I am not normally a huge autobiography fan. Bruce Springsteen however in my eyes is a rock god and I could not wait to read this. His story starts off when he was young and talks about growing up in New Jersey and what life was like back then, not only in his hometown but in America at that time as well. This during the late 50's and then into the 60's. I found this really interesting. American went through so many changes and challenges during this time, so it was good to read about it from someone who lived through it.

Bruce from a young age wanted to play music after watching "The King" on TV and this book goes into so much detail from when he got his first guitar to what he had to do to get noticed. I would say 2/3 of this book are about Bruce's life up to and including his third studio album Born to Run which was released in 1975. Whilst reading this book you found yourself lost in Bruce's mind. When I think about today and today's musicians, a lot of them come from TV shows like the X-Factor or The Voice and I think to myself if you really wanted to be a music star then you would do so much more about it rather than sing at home and then try your luck on TV. Bruce goes into so much detail as to what he had to do to become a musician from playing clubs for free night after night to sleeping on friends couches because he could not afford a place to live as whatever money he had went towards his music. There were so many times he just wanted to give up but that determination and that drive to become a successful musician kept him going and I for one would like to thank him for that.

It was really interesting to find out how the music industry worked back in the late 60's and 70's as well. It is completely different to how it works today. Bruce went into record deals and studio time and what went into these along with all the struggles.

One thing I found amazing about this book was how Bruce talked about struggling with depression and how open he was about it. Mental health can effect anyone and there are still so many people that struggle to understand how people can be "depressed" which really angers me in a way. I am glad that he talked about this because if Bruce Springsteen suffers then anyone can. If one person reads this book and then gets help and talks then he potentially has saved a life.

The writing of this book is so different to most other autobiographies that I have read. Most chapters are written as though it is one big song and I loved this. It showed what a natural writer Bruce is. The final third of the book goes from Born to Run to present day and in a way if I am being picky was like it was skipped through compared to the first 2/3 of the book but maybe that is just me wanting to know so much more. Potentially he could have finished this book after Born to Run and then spend the next few years writing part two.

Like most of my reviews I don't want to go into too much detail and give away too much as that would ruin it for people that want to read this that have not yet got round to doing.

I scored this book a 5 out of 5. I loved it so much it was a cracking read. If you love music then I would fully recommend you give this a read.

I would like to know who else has read this. Do you agree with me or not? let me know.... 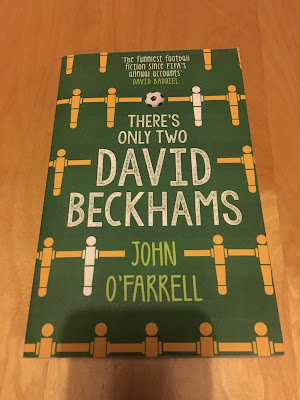 Football (Soccer) has been a part of my life since I can remember. I am a season ticket holder of the current English Premier League Champions Leicester City and have been for 21 seasons. Yes I know we are not doing so well at all this season but hey ho.... I first heard about this book on Twitter, I had seen a couple of tweets by people saying how funny and great it was. The name of the book stood out for me “There’s Only Two David Beckhams”  David who is English royalty when it comes to sports and whom I have had the pleasure of seeing play football in person on numerous occasions. This is my first John O'Farrell book I have read.

"A laugh out loud, very witty book for all sports fans"

Ever wasted hours debating your ‘All Time England XI’? Well now it’s 2022 and the discussion is finally over, England have eleven players as good as any of them. The unbeatable national team have reached the final of the Qatar World Cup. But one journalist is convinced there is a scandalous secret behind England’s incredible form. His lifetime’s dream is to see the Three Lions win the World Cup. But if he pursues and exposes the shocking truth, his beloved England could be sent home in disgrace.

Suddenly this is much more than England vs Germany; it’s Love vs Duty, it’s Truth vs Happiness. The pressure of the penalty shoot-out is nothing compared to this.There’s Only Two David Beckhams is John O’Farrell’s love-letter to football; part-detective story, part-sports memoir, part-satire on the whole corrupt FIFA circus; it just made the final for the funniest football fiction ever written...

I really liked how this book was written. You follow through the eyes and thoughts of Alfie Baker a journalist and football fanatic. As the book moves through time heading up to the 2022 World Cup its the stories for me that make it as good as it is. There are so many memories from when you were a kid or even to playing/watching when you get older. I found this book so funny in places that there were times where I had to take my glasses off to wipe my eyes. It was like when you get the giggle fits and you just can’t stop. My wife on a few occasions was laughing so much at just me laughing at this book.

It is a very easy going book as well, so if you fancy something light & funny where you do not need to really concentrate too hard then this is the book for you. Would you need to understand football (soccer) to get this book?? I mean it would help, but there is more than enough for people to enjoy this as a story. However the story itself is a wild dream and could never happen in real life so you would need to go into this with an open mind. I did find the story really clever and enjoyable though which had a few cracking twists at the end. I could go into more about the story but I would not want to ruin too much for you......

The characters are mainly lads and the relationships between lads and football but are very believable. You could walk into any bar in any city in the world on a match day and find these characters in every one.. There is a lack of female characters in this book however which makes it out that women are either not into football or would not understand this. I know so many women who are into football and they, like men do the same. Go in groups, drink, eat and travel the country supporting their team. I am proud to say that my favourite team has one of the best for female to male ratio supporters in the country.

Ever since I was a kid I have always dreamt of England winning the Word Cup. My dad was 18 in 1966 when England won it for the first and only time. So...... Can England win another World Cup??? Well you will have to read to find out...

I scored this book a 5 out of 5. I loved it and would probably say it was one of the funniest books I have ever read. If you are a sports fan especially football then I would give this a go. As previously mentioned this is my first John O'Farrell book that I have read and I will definitely be reading more when I get the chance.

Has anyone else read this book? What did you think? do you agree with me or not? I would love to know.