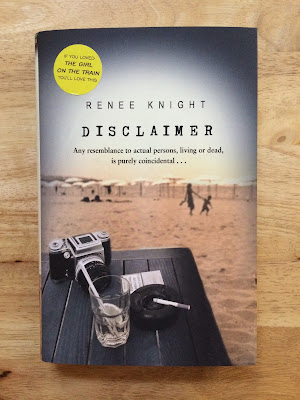 Disclaimer
by
Renee Knight
Disclaimer is Renee Knight's debut novel and is a psychological thriller with spine chilling twists and dark secrets.
Catherine moves into her new apartment with her husband and comes across a novel she has never seen before. After deciding to start reading this book she wishes she had not. why? Because she realises that the main character is her and she is sickened to know that someone out there knows a dark, dark secret about her that she thought she would take with her to her grave.
I first heard about this book on Twitter. Just like The Girl on the Train by Paula Hawkins there was such a buzz about this book. People who had read pre-published copies were saying it is a must read and you will be disappointed if you don't. Claudia Winkleman BBC Radio 2 art show presenter had also thanked someone on Twitter for making her read it. This just made me more excited for it to be published.
The book started completely differently to how I imagined it would, but not in a bad way. I don't know why. I just read the inside cover and thought the story would be built up but it was just like..... BANG straight into it. I really liked how the book was written as it flicked between Catherine the main character and the person who knew her secret. This I guess is the best way to get people thinking and wondering what has happened. Most of the chapters finished with just a little extra teaser and was begging you to read on. I remember one night reading it and I was tired but so desperate to find out what had happened. It felt like when all the Christmas presents are under the tree a week before Christmas and you are trying to find out what you have got.
The characters were written very well. I liked how you understood all of them, mainly because there were just normal people like you and me which makes it more real life. There were 4/5 main characters and then a few supporting cast members which keeps it less complicated.
Was there anything I did not like about the book? Yes but not much, it was mainly just a few chapters I thought went a bit flat and did not have the spark that the majority had. The rest was really good.
Did I guess what had happened at the end? No.. failed again, but I thought the story was original and not like anything I had read before.
I scored this book a 4.5 out of 5. I only dropped half a point for the flat chapters but that could just be me (Sorry Renee). I definitely recommend you read this book especially if, like me you love thrillers. I can't wait to see what she writes next
I would love to know what people think that have read this book. Do you agree with me or not? Let me know.
Speak soon
CBailey31  ﻿