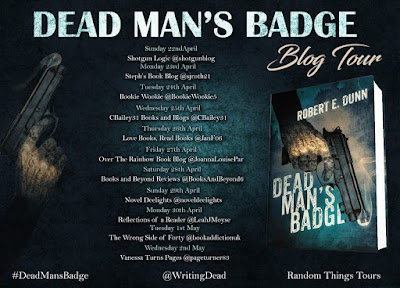 Hello and welcome to my stop on the #BlogTour for Robert E. Dunn's Dead Man's Badge. This is actually my first ever #BlogTour post so a massive thank you goes to Anne Cater from Random Things Tours and the author Robert E. Dunn for the copy of this book to review.

Career criminal Longview Moody, on the run from killers, assumes his dead, twin brother's identity as the new Chief of Police of a Texas town that's being terrorized by a Mexican drug cartel. To pull off the deadly deception, Longview desperately works to become the kind of cop and man that his brother was. But when the two lives he’s living converge, he’s forced to embrace the violence within him to get justice...and vengeance.

This was the first time I had read a book by Robert E. Dunn so I went into this with an open mind. It is also the first time I have read a book that involves the Mexican/America war on drug Cartel's. When I think about it, I am not to sure why this is. I have watched plenty of movies and TV shows around this and always loved them. However after reading this, it will definitely not be my last. I loved it. From the very beginning where you have a man digging his own grave in the desert to the end where you are desperately trying to find out the answers to all the questions you have been asked during the book.

I really enjoyed the characters in this book. The lead character Longview Moody was great to follow. I found that I was kind of cheering him on through out the book as this criminal turned police chief did what he wanted and sort of made up his own police rules. He did not care who he upset whether it was the police officers that worked for him or the people at one of America's 3 letter agencies. This wall all in his quest to rid the town of some nasty people but most of all to stop the people who wanted him dead. One thing I think is brilliant when reading is where you can't trust any of the many characters, they all could be hiding something and are not who they appear to be. This gets you guessing all through the book and helps with the speed you turn the pages as you need to find out the truth. This book was one of them. At one point I thought everyone that appeared clean was dirty and those that were dirty could also be clean playing dirty.

This book has lots of violence in it so I would probably not recommend this to children/teenagers or if you are easily offended by this. But, if you are not put off by that, I would fully recommend this book. The locations, the characters, the action and the deceit along with the really exciting storyline make this a fantastic read. As mentioned above this is my first novel by Robert E. Dunn that I have read, but I will be treating myself to some more come pay day.

Check it out on Amazon UK -

I wasn't born in a log cabin but the station wagon did have wood on the side. It was broken down on the approach road into Ft. Rucker, Alabama in the kind of rain that would have made a Biblical author jealous. You never saw a tornado in the Old Testament did you? As omens of a coming life go, mine was full of portent if not exactly glad tidings.

From there things got interesting. Life on a series of Army bases encouraged my retreat into a fantasy world. Life in a series of public school environments provided ample nourishment to my developing love of violence. Often heard in my home was the singular phrase, "I blame the schools." We all blamed the schools.

Both my fantasy and my academic worlds left marks and the amalgam proved useful the three times in my life I had guns pointed in my face. Despite those loving encounters the only real scars left on my body were inflicted by a six foot, seven inch tall drag queen. She didn't like the way I was admiring the play of three a.m. Waffle House fluorescent light over the high spandex sheen of her stockings.

After a series of low paying jobs that took me places no one dreams of going. I learned one thing. Nothing vomits quite so brutally as jail food. That's not the one thing I learned; it's an important thing to know, though. The one thing I learned is a secret. My secret. A terrible and dark thing I nurture in my nightmares. You learn your own lessons.

Eventually I began writing stories. Mostly I was just spilling out the, basically, true narratives of the creatures that lounge about my brain, laughing and whispering sweet, sweet things to say to women. Women see through me but enjoy the monsters in my head. They say, sometimes, that the things I say and write are lies or, "damn, filthy lies, slander of the worst kind, and the demented, perverted, wishful stories of a wasted mind." To which I always answer, I tell only the truth. I just tell a livelier truth than most people.