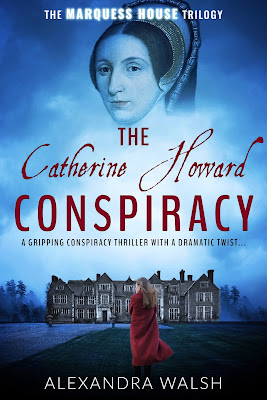 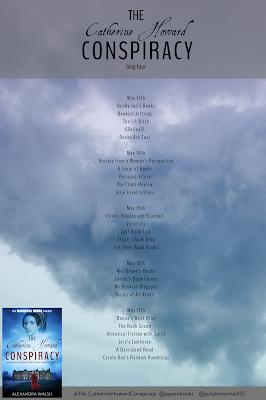 Hello, and welcome to my stop on the #BlogTour for The Catherine Howard Conspiracy by Alexandra Walsh. Firstly, please can I say a massive thank you to Sapere Books and the author Alexandra Walsh for a copy of this book to read and review, I really appreciate the opportunity to do so.


What secrets were covered up at the court of Henry VIII …?

When Catherine Howard arrives at the court of King Henry VIII to be a maid of honour in the household of the new queen, Anne of Cleves, she has no idea of the fate that awaits her.

Catching the king’s fancy, she finds herself caught up in her uncle’s ambition to get a Howard heir to the throne.

Terrified by the ageing king after the fate that befell her cousin, Anne Boleyn, Catherine begins to fear for her life…

Mary inexplicably cut all contact with Perdita and her twin sister, Piper, but she has left them Marquess House, her vast estate in Pembrokeshire.

Perdita sets out to unravel their grandmother’s motives for abandoning them, and is drawn into the mystery of an ancient document in the archives of Marquess House, a collection of letters and diaries claiming the records of Catherine Howard’s execution were falsified…

What truths are hiding in Marquess House? What really happened to Catherine Howard? And how was Perdita’s grandmother connected to it all?

The Catherine Howard Conspiracy is the first book in the Marquess House trilogy, a dual timeline conspiracy thriller with a twist on a well-known period of Tudor history.

When it comes to history books, I only read maybe 1 in 25 that are set before the 1980's. I love history of all forms, ranging from art to the building of the pyramids, but not when it comes to reading books. I am not sure why really. This book however jumped out at me when I first read the blurb, and I could not wait to get started. Who does not love a good conspiracy theory? Especially when it means that what we have known for 100's of years could be all wrong, covered up by secret societies from around the world.

It did not take me long to get into the story at all. A little bit of scene setting and introduction of the characters was all that was needed. I love how the book was written, with the story flicking between 1539 - 1543 & 2018. This helped with the building of the story and made you want more. You needed to know what was happening next but had to carry on from where you left off previously in the other century. It was like reading two stories but about the same thing. The book had me excited all the way through, and I had to keep reading to finish it. There were times when chapters finished at 1am but I had to carry on even though I was up at 6:30am for work. I kept thinking I will deal with the tiredness in the morning.

The Characters (in 2018) were greatly written and I loved each one. There was always a sense about them, that you could not trust. This kept you guessing as to who was telling the truth, who were keeping secrets and who could be basically part of some society that has been running for 500 years.
Before starting this book I thought about having a little recap about Henry VIII and his life as King along with his wives, but decided against it. I made the right decision because the author explained a lot about what happened around that time and who people were in relation to King Henry VIII. If you have no knowledge of this period then do not worry at all.

Now the author states that this is a work of fiction..... Well...… She says that, but do I trust her? I would love to think that the events in this book were true. I was a little sad when the book finished but also very excited as book two of the trilogy is out in June and I will definitely be buying this as I need to know what happens next. I thought this book was amazing and to think I would not normally have chosen to read it. I am so happy I did though.

Have you read this book? what do you think? Do you agree with me or not? Let me know... 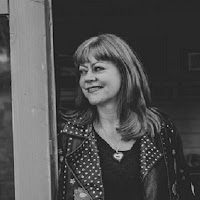 From tales spun for her teddies when she was a child (usually about mermaids) to film scripts, plays and novels, Alexandra Walsh has always been a storyteller. Words are her world. For over 25 years, she has been a journalist writing for a wide range of publications including national newspapers and glossy magazines. She spent some years working in the British film industry, as well as in television and radio: researching, advising, occasionally presenting and always writing.
Books dominate Alexandra’s life. She reads endlessly and tends to become a bit panicky if her next three books are not lined up and waiting. Characters, places, imagery all stay with her and even now she finds it difficult to pass an old wardrobe without checking it for a door to Narnia. As for her magical letter when she was 11, she can only assume her cat caught the owl!
Alexandra’s other passion is history, particularly the untold tales of women. Whether they were queens or paupers, their voices resonate with their stories, not only about their own lives but about ours, too. The women of the Tudor court have inspired her novels. Researching and writing The Marquess House Trilogy (Book One: The Catherine Howard Conspiracy) has brought together her love of history, mysteries and story telling.
Website: http://www.alexandrawalsh.com/

Posted by CBailey31 Books & Blogs at 10:27 No comments: Links to this post