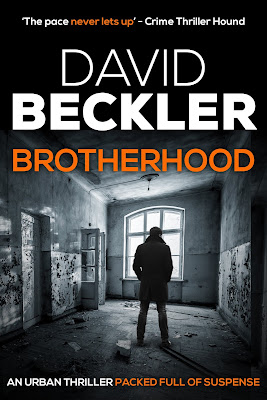 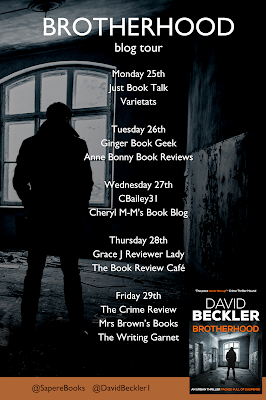 Hello and welcome to my stop on the #BlogTour for Brotherhood by David Beckler. Massive thanks goes to Sapere Books and the author David for a copy of this book to read and review.

An Ex-Marine forced to confront his troubled past...

When Byron Mason's estranged nephew, Philip, rings him out of the blue in desperate need of help, he knows he must put his personal feelings aside to protect his family.

A teenage boy has been murdered, and Philip is one of the suspects. Worse than that, the dead boy was the nephew of Ritchie McLaughlin - a local thug who Byron has clashed with in the past - and Philip has now gone missing.

Is Philip in danger? Can Byron and Adam find him before the police do? Or has Byron's violent past with McLaughlin come back to haunt him?

This nail-biting new thriller series will have you on the edge of your seat!

David Beckler? Who? You may ask. Well I certainly did. I mean I have never heard of him before being asked to read and review this book. Now I know though, I am so happy. Reading this book has introduced me to a new thriller writer that I will definitely read again.

I went into this book with an open mind. I think you have too when it comes to new authors. I read the blurb and that was it. I did not look up what other people scored it or even wrote about it. The book starts off with violence. This got me to sit up from the off. Now when it comes to violence I am probably the least violent person around but when it comes to books I love it. I don't know what this says about my mind though. The action started and you were gripped. The scenes were being set and the words flew of the pages as you needed to know what was going to happen next.

About a quarter of the way through though I found the book stalled a little. At the time I was so upset due to the start and was praying that, that was not the end of the good stuff. Thankfully a few chapters later it started to pick up again. It was like being at a crossroads and deciding which route to take. Thanks to David he went all the way to Actionville. The second half of this book was crammed with action, having a good mix of goodies, baddies & the police as well as loads more violence that left a trail of blood and bodies.

The characters I found were so good in this book. Even the goodies were kind of baddies to an extent. Byron and Adam were really fun to follow as they chased around Manchester in their own style looking for the bad guys and Philip. The two main police officers in the book had their part to play, but not in a hero of the story way, which I really liked as this was different to most crime books. As well as the gang boss you also had a former child soldier from Africa, who was adapting to life in the UK. As the book went on you read more about what the child had been through when he was really young and this added a really interesting addition to the story.

If you, like me, like crime thrillers then I fully recommend this book to you. Also if you do read it and find it a bit testing, then make sure you carry on as you will not be disappointed. 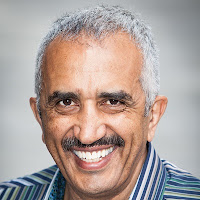 Born in Addis Ababa in 1960, he spent his first eight years living on an agricultural college in rural Ethiopia where his love of reading developed. After dropping out of university he became a firefighter and served 19 years before leaving to start his own business.

He began writing in 2010 and uses his work experiences to add realism to his fiction.

The Mason and Sterling series centre on two ex-Royal Marines, Byron who now runs a security company and Adam who is a firefighter. A strong cast of supporting characters support his protagonists. Sapere Books are publishing Brotherhood, the first novel in the series, in late 2018.


David lives in Manchester, his adopted home since 1984.

In his spare time he tries to keep fit—an increasingly difficult undertaking—listens to music, socialises and feeds his voracious book habit.
Posted by CBailey31 Books & Blogs at 12:00 No comments: Links to this post 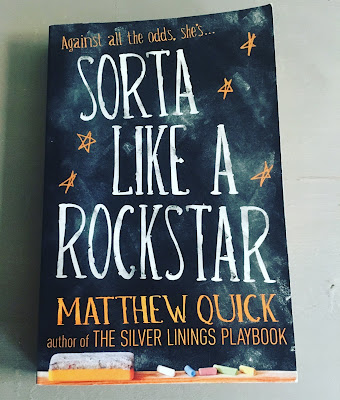 Those that have read my blog before will know that Matthew Quick is one of, if not my favourite author. Not only has he written my all time favourite book in The Silver Linings Playbook (Don't get me started on how woeful the film was) but every single book of his I have read I have really loved. I am a bit worried that one day I will read one though and think meh! Hopefully not anytime soon.

"Another fantastic read that plays with all your emotions as always but leaves you feeling oh so happy. Mr Quick Sir, you are amazing!"

Amber Appleton has a lot to be thankful for.

Amber Appleton has never had it easy.

Both are true. On the one hand, she's got the best friends a seventeen year old could ask for and a loyal dog. Bobby Big Boy. On the other, her mum frequently has too much to drink, Amber's never quite sure where her next meal will come from and ever since her mum's latest boyfriend kicked them out, they have been living in the back of a school bus.

To those around her Amber is an inspiration, a Rockstar - of hope. She's always managed to remain upbeat, to find the light in the darkest of situations. Until, that is, an unimaginable tragedy occurs. Can Amber still be thankful now things are harder than she'd ever thought possible?

Matthew Quick has this great way of pulling you into a story. Once you are there you never want to let go. Sometimes you may want too as the stories can be quite sad, but you are so involved with the characters that you cannot let them down, you have to stay with them. All of Matthew's books are centred around mental health, and people who struggle through life. Mental Health is very important to me personally and it is great to see that around the world people are starting to talk about it more. However we have so much more to achieve around this subject.

In all the books that Matthew has written you go on this emotional rollercoaster that tests even the stubbornest of people who believe they will not cry at anything. Now you may be asking why would I want to read a book that is sad and upsetting. Well... Sorta Like a Rockstar like all of his other books is a wonderful story, that not only makes you realise that your life is not actually that bad but takes you on a ride that ends with you feeling so happy inside. As I read the last 50 pages I must have been smiling so much because at the end my jaw was hurting so much. I read this book in just over a week as the words just flew off the pages. If you have a reading challenge going this year I would fully recommend this one to keep your numbers up.

I loved all the character's in this book... Well, apart from one but I can't tell you who as that may ruin the storyline. Amber the main character is a 'Rockstar' who teaches us that it does not matter how bad life gets you should always look to help others even if they say they don't want any help. Amber volunteers at a old peoples home on a Wednesday and the friends that she has there are brilliant and some of my favourite bits from this book happen because of them. I personally did not have a favourite teacher at school but I know that thousands of people do. Not just because they were nice to them but they made a difference in their life. Amber's is Mr Franks and I think his character is also wonderfully written and great to follow through this book.

Was there anything bad about this book? Errrrrrrrm…. Nope!

Sorta Like a Rockstar is once again another classic from Matthew Quick and I can't wait to read the next one of his. Last week I bought The Reason You're Alive and should hopefully read that in the next few months. That and the other 140 books I have in my TBR pile haha.

Have you read this book? What do you think? I would love to know, so comment away...

CBailey31
Posted by CBailey31 Books & Blogs at 10:38 No comments: Links to this post